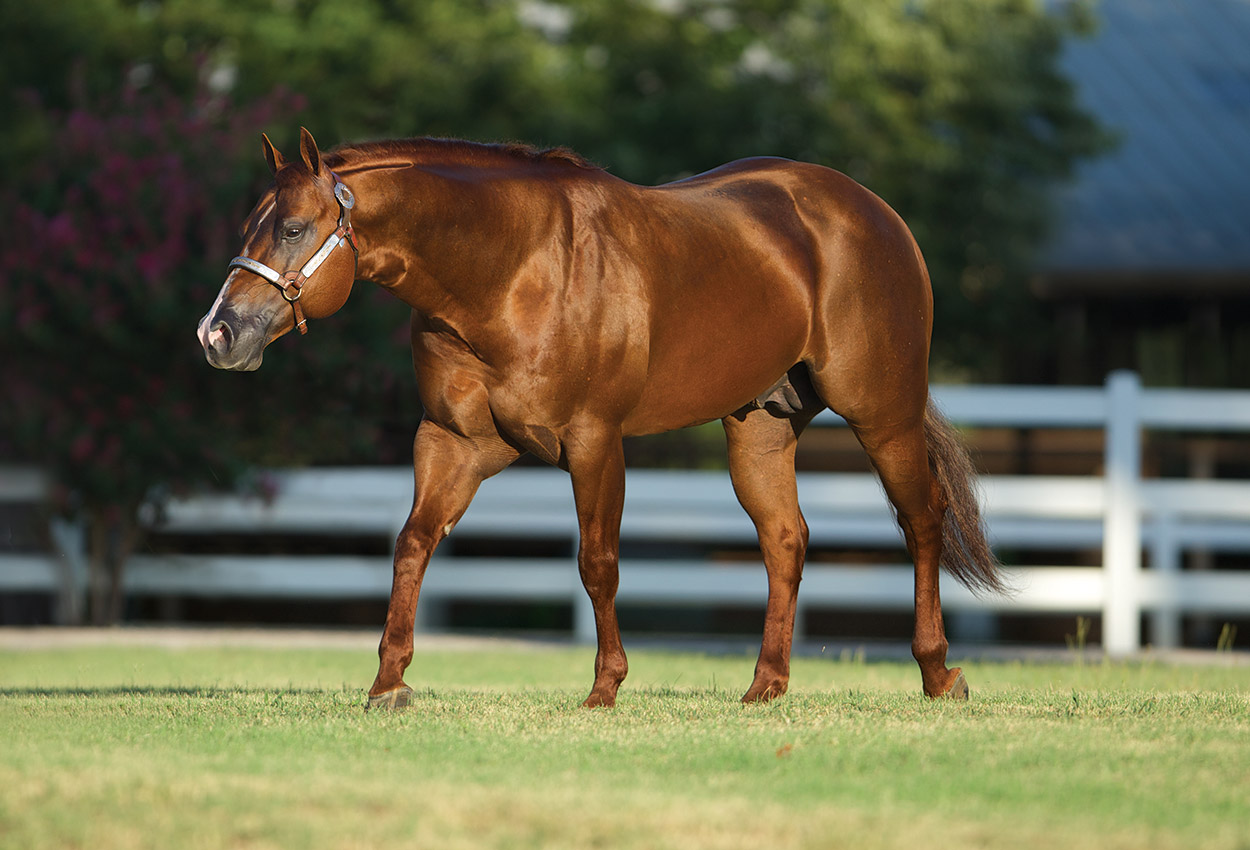 It was written in the stars for Not Ruf At All –
and it’s not over yet!

It is said that a brilliant athlete without a mind to match is a lost cause. In the competitive world of performance horses, it is the smart trainer who explores the mind of a young prospect and finds a willing and able partner. That combination, precisely four years ago in Oklahoma City, was by far the brightest star.

It was there at the 2013 National Reining Horse Association Futurity that Not Ruf At All along with Million Dollar reining professional Jason Vanlandingham maneuvered to the Level 4 Open Championship. They marked a stellar 229 score, which closed out a successful 2013 show season that began with the Level 4 Open titles at the Tulsa Reining Classic in Oklahoma and High Roller Classic in Las Vegas.

That was just the beginning.

Not Ruf At All and Vanlandingham went on to earn $456,501, situating the stallion among the reining industry’s highest earners of all time. They won reining’s “Triple Crown,” meaning the pair is one of the elite few to win Level 4 Open Championships at the NRHA Futurity, NRHA Derby and National Reining Breeders Classic.

Not Ruf At All and Vanlandingham certainly had the right ingredients to make history in the NRHA. And they’re not finished. In fact, they’re on tap for an encore performance on their way to earning a slot on the American team for the 2018 Federation Equestre Internationale (FEI) World Equestrian Games.

“Vinny” [Not Ruf At All] is our star,” said Vaughn Zimmerman who owns the stallion in partnership with his son Justin Zimmerman. “This horse has accomplished everything we dreamed about and so much more.”

That was the plan

Bred to be a winner, Not Ruf At All is by A Sparkling Vintage, an NRHA Million Dollar Sire by Shining Spark – a stallion with $10 million in offspring earnings, according to Equi-Stat. A Sparkling Vintage is out of Vintage Badger, a mare by the legendary Peppy San Badger and out of Taris Vintage. In reining circles, Taris Vintage is one of the greats and is the maternal granddam of two NRHA Futurity Champions: Hollywood Vintage who won with Dell Hendricks in 1999; and Taris Designer Genes ridden by Randy Paul in 2006.

On the bottom side, Not Ruf All is out of All Ruffed Up, a mare by Lil Ruff Peppy, a sire who has an offspring record of more than $3.3 million. Up and down, and side to side, Not Ruf At All was one smooth package as a reining horse prospect. It was this black ink that intially interested Vaughn Zimmerman, an NRHA Million Dollar Owner and 2018 NRHA Hall of Fame inductee.

“I’ve been fortunate enough to breed and raised winning horses in so many different areas,” Zimmerman said. “I’ve had race horses, halter horses, pleasure horses and the reiners have held my interest for the longest time.”

Not only has Zimmerman had a number of successful reining horses, but he also owned Boonlight Dancer when that stallion won the 2001 National Reined Cow Horse Association Snaffle Bit Futurity Championship with Todd Bergen. His inter-disciplinary experience, coupled with an innate knowledge of the horses, has served Zimmerman well over the years.

“A good horse is a good horse, no matter the discipline,” he explained. “ I have tried to see the best in all of the winners.”

So when resident trainer Bobby Avila Jr. called on his employer to take a look at a long yearling at Casey Hinton’s place at the end of 2011, Zimmerman was primed and ready. As for the colt – Not Ruf At All was stout and strong, smart and quick.

“I like to see any horse built to do the job he was bred to do,” Zimmerman said. “This colt had the right kind of mind and he was already built right. He has so much muscling in his hind end and down the leg. As he’s matured, he’s gotten even stronger and people tell me he has the look of a horse with double muscling in that back end.”

Impressed, Zimmerman closed the purchase deal and Not Ruf At All went home to Missouri. Truthfully, Zimmerman wasn’t really thinking about aiming Not Ruf At All toward the NRHA Futurity arena. Instead, his idea was to prep the young stallion for the sale ring. With a reputation of bringing young stars to the prestigious NRHA Markel Insurance Futurity sales, Zimmerman had consigned the high-seller in 2011 (Commanders Lil Step who sold for $200,000) and he was anxious for a repeat performance.

“I thought we’d top the sale or at least come very close,” Zimmerman recalled about his hopes for Not Ruf At All. “It just didn’t click, and I ended up paying the full commission to buy him back myself.”

As time has told, many experienced buyers missed the signs Oklahoma City in December 2012. As it came to be, the stallion’s future was written in the stars; those stars led straight to the front door of Jason Vanlandingham’s barn in Whitesboro, Texas.

Vanlandingham has trained horse professionally just since the 1990s, but in that short time he has won right at $1.5 million dollars. He’s won both Level 4 Open and Level 3 Open championships at the NRHA Futurity, along with Level 4 Open titles at the NRHA Derby, National Reining Breeders Classic, and a long list of other major limited-age events. Vanlandingham keeps his client list small and his horse operation family-driven and family-worked – he’s selective about the horses that he trains.

“He came into my barn in January of his three-year-old year,” he recalled about the day Not Ruf At All arrived. “He’d been well started by Bobby Avila, Jr., and I was expecting a nice young prospect who’d hopefully be ready for the early futurities and then the NRHA Futurity. That was the plan.”

“He was so good minded – that’s the first thing I look for in a prospect, and he delivered it every day,” Vanlandingham said as the horse progressed through the spring of 2013. “I’d teach him something, he’d work on it with me and I never had to go back and do it over and over again. He just ‘got it’ so easily.

“He has such feel, and so much strength. His body control is amazing,” Vanlandingham continued. “He was the best minded, best learner I’ve ever seen. He went forward from the beginning and never took a false step. There was never a time through his training that I thought perhaps I was asking too much.”

Not Ruf At All displayed real superstar potential as that fall’s futurity season approached, and that’s why Vanlandingham and Zimmerman decided to forego many of the regular tune-up shows.

“We had a plan for this colt right from the start; Tulsa, the High Roller and then the NRHA Futurity,” Vanlandingham explained. “The colt was such an athlete and all he needed was to get used to the arena – the sounds and people all around; it never fazed him. Vaughn and I knew we were on track following that first title at Tulsa.”

Not Ruf At All dominated the 2013 season’s major futurities – claiming top honors at Tulsa, the High Roller and “the big one” – the NRHA Futurity. Then, as was said before, that was just the beginning.

There plan from here

Not Ruf At All eventually inked fresh reining history as an earner of close to a half-million dollars, a “Triple Crown” winner, and one of the most talented performers to grace the performance arena. The stallion has three foal crops on the ground and the Zimmermans are eager about what happens next.

“My son Justin and I have a great relationship and have become partners in this horse business. It’s something we enjoy doing together.” Vaughn said. “He and I own a number of really select mares together, and we’ve crossed several of those on Not Ruf At All. We’re looking forward to seeing what those foals will do. It’s got to be good!”

Currently, Not Ruf At All stands at Casey and Kathy Hinton’s Cedar Ridge Stallion Station – the place where his story began all those years ago. Between the Zimmerman’s, Vanlandingham, Avila and Hinton there will be a solid group of Not Ruf At All’s offspring represented at the 2018 Futurities! The countdown has begun and so has the enthusiasm for this new crop of star power.