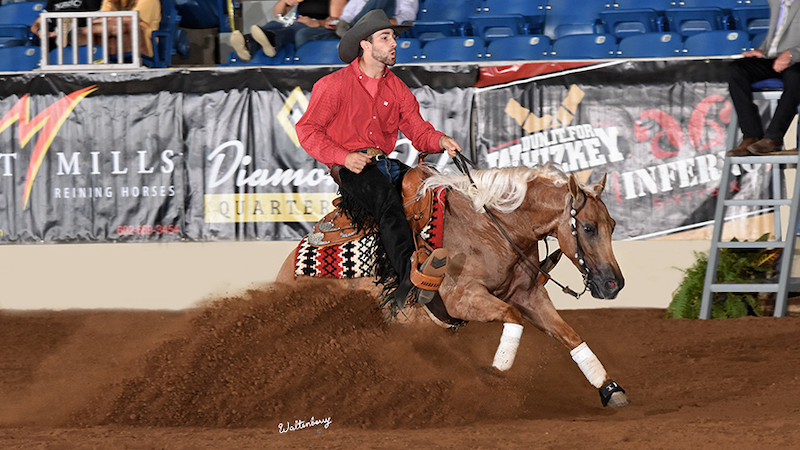 During the first section of the National Reining Breeders Classic (NRBC) Open finals on Saturday, another Vanlandingham entered the pen wearing the same color scheme. His son, Dalton Vanlandingham, 21, piloted Ruff Little Whiz, a colt by Not Ruf At All, to a score of 220.5 to win the Championship of Levels 2 & 1 Open.

The ensemble apparently retained some of the good luck, as Dalton and Ruff Little Whiz earned checks totaling $11,402.

“When I ran in there, I could tell he was locked in from the time I ran into the gate,” Dalton said of the horse, who is owned by his father. “He’s a little trickier horse to get locked in, but he definitely showed up for the finals. He was super in the preliminary round. I had a little late lead change, and that kept us from making the Level 4 finals, but it is what it is.”

Dalton has ridden Ruff Little Whiz off and on since the colt was 2 years old.

“I started him as a two-year-old, and he was a little, tiny thing. We actually nicknamed him ‘Little Man.’ Ever since the beginning he has been a nice, fun horse to ride. Dad thought he was a superstar going into his 3-year-old year, but he got hurt so he sat out from the NRHA Futurity and Derby,” Dalton shared. “So this is his first major event.”

The two Vanlandinghams work well together.

“We have some similarities, but also some differences. I like to go ahead and pitch it to them, and he likes to make sure everything is perfect. When I can get on one after him, though, it’s easy to pitch it away and let them do their thing,” Dalton said with a smile. “I thank my mom and dad for sure. They have always been right behind me no matter what I did. They have been there every step of the way.”