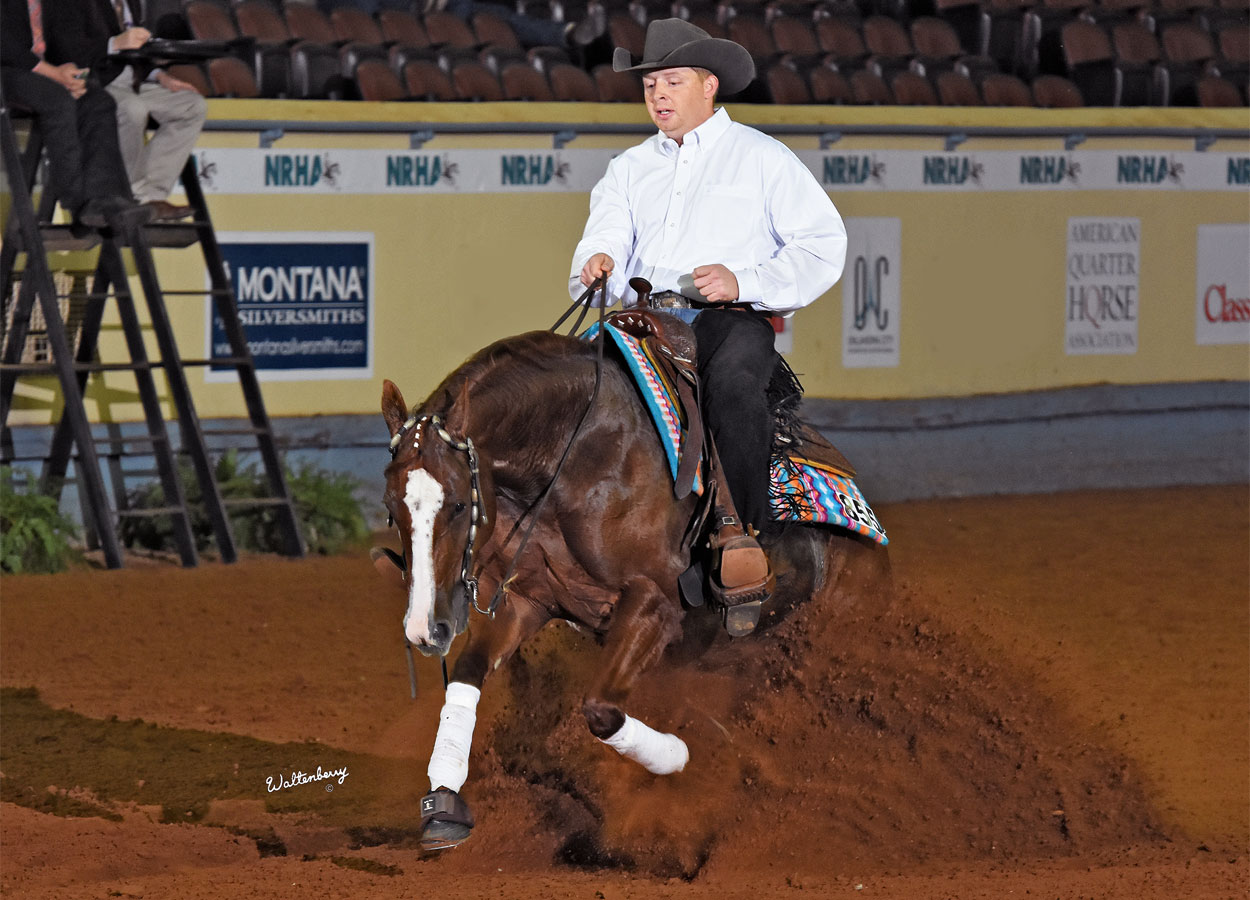 Great horses and riders were shining under the Friday-night lights of the Jim Norick Coliseum at State Fair Park in Oklahoma City. The National Reining Horse Association (NRHA) CINCH Non Pro Futurity featured the top horses and riders from the preliminary round, and the champion was decided in an exciting runoff.

Jesse Asmussen and Ruf Style Of Play drew the dreaded No. 1 position for the CINCH Non Pro Futurity finals, but the pair made it count, marking a 220 to take the lead of Levels 3 and 4. As rider after rider took a shot at the lead and fell short, Asmussen and his team worked hard to stay busy. “We were back at the stalls sitting around, pacing, sweeping, and doing anything to just stay busy,” he said. “You don’t really expect a tie. You think someone will come in and beat you.”

Luca Fappani had a wild run-in with a dog that jumped into the pen during his finals’ run, even though State Fair Park requires leashes for all dogs and were checking them at the door. Fappani was given the option of running again after the last draw. “I was just waiting for Luca to go at the end, and then he also marked a 220. We decided to run off, and we had only 15 minutes to get ready,” Asmussen explained. “This mare has been at Kole Price’s, and he told me to just trot her around and that she’d be good to show. It was nerve-wracking, but she was great.”

Rules dictate that the runoff occurs in the same draw order as the original, so once again Asmussen knew he had to set the pace. Once again, the 3-year-old mare gave her best, resulting in a 222. “She was phenomenal in the runoff. I couldn’t believe she was better there than the first time I showed her in the finals,” he said.

The win came with a bounty of prizes, and checks totaling $61,455. “Winning this is a dream every year, and until it happens, it is hard to imagine.”

Asmussen purchased Ruf Style Of Play, by Not Ruf At All and out of UB Stylin With Me, from Vaughn Zimmerman earlier this year. “Bobby Avila Jr. called me in June and told me I needed to buy her. I didn’t need another horse at the time, but he kept calling me and talking to me about her, so we ended up buying her without ever trying her,” he explained.

After showing the mare a couple times, Asmussen elected to send her to Kole Price. “We live in Iowa, and the weather was really bad, so I sent her to Kole’s and he did a phenomenal job getting her ready to come here. She felt so well-trained and easy. I owe him a huge thank-you. I couldn’t have done it on my own. Kole’s wife, Kelsey, did a great job of getting her pretty and making sure everything looks nice,” he said. “I also thank my wife and boys. It’s been a long week, and the boys have been great. My wife does so much at home and keeps me from self-destructing. My mom and dad are also huge supporters. I thank them so much.”

Making this win extra-special for Asmussen is that his long-time friend Dave Kunkle was able to be present. “Dave is the guy who got me started, and both times I’ve won it before he’s been in Iowa, so him being here was pretty special,” Asmussen said.