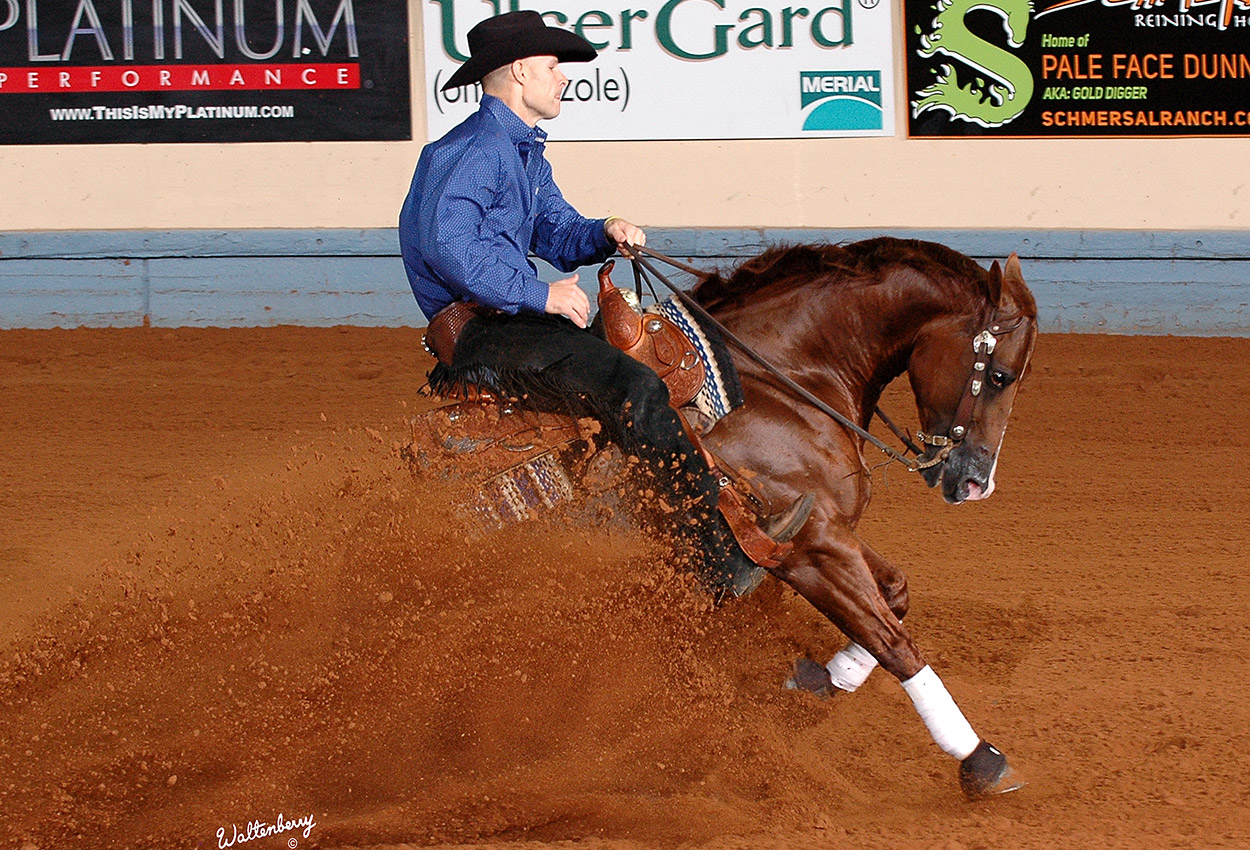 Jason Vanlandingham wins the NRHA’S top billing
with Not Ruf At All for owner Vaughn C. Zimmerman.

The second was first December 7 as Jason Vanlandingham rode Not Ruf At All to reining glory.

In the National Reining Horse Association Futurity open Level 4 finals, Jason was second in the draw with the stallion owned by Vaughn C. Zimmerman of Springfield, Missouri.

“I ran him hard to his last three stops, and he hit them all huge,” Jason said. “Every time you say the word, ‘whoa’ to him, he stops like that, so I had a mountain of confidence.”

Riding pattern 10, Jason asked his horse for everything he had in the Jim Norick Arena at Oklahoma State Fair Park.

“My goal on that horse was– because he’s such a huge stopper – was to use all my energy on the stops and turns and so I ran him wide open to his (first) stop, and he just stopped huge and backed up great. He turned good both ways, and I circled him pretty, with lots of slack in the reins, and he stayed right with me everywhere. There wasn’t a time the entire night that he was a step ahead of me.”

The ride was good for a 225.5 score from the judges, and then Jason was left to wait.

“When I drew 2 (in the draw), the air went out of me, but the good thing about it was we had really good ground,” Jason said. “It was early, so the ground didn’t have a chance to get torn up. And when you mark a big score like that, it puts everybody else in chase mode.”

“Vinny’s” score held to the end, with the other horses chasing to no avail.

“He’s very cool,” Jason said. “When you’re on his back, he’s as sweet as can be. On the ground, he’s always into something. There’s not a mean bone in him, but he’s always pulling on his sheet if it’s tied to the front of his stall and things like that. He’s definitely got a personality. He’s a neat little horse.”

Not Ruf At All is a 2010 sorrel stallion by A Sparkling Vintage and out of All Ruffed Up by Lil Ruf Peppy. He was bred by Petra Zeitler of Valley View, Texas, and is owned by Vaughn, a 20-year AQHA breeder. Vinny earned $165,000 for the win, with $8,250 going to Petra.

“I’ve had him since January,” Jason said. “He came up through Vaughn and Justin Zimmerman’s program. Bobby Avila Jr. trained him his 2-year-old year.”

Vinny had $14,631.36 in NRHA earnings before entering the NRHA Futurity.

“We won Tulsa (Reining Classic) and went to Vegas (for the High Roller Reining Classic and won Vegas, so coming here, I had a lot of confidence,” Jason said. “He held up for me and it all went according to plan. The good Lord has been taking care of us this year. I can’t tell you how blessed we are.”

Jason thought about riding the stallion in one more futurity, but he got some sage advice on how to handle the stallion’s career.

“Tim McQuay told me to take him home and put him in bubble wrap (until the NRHA Futurity),” Jason said.