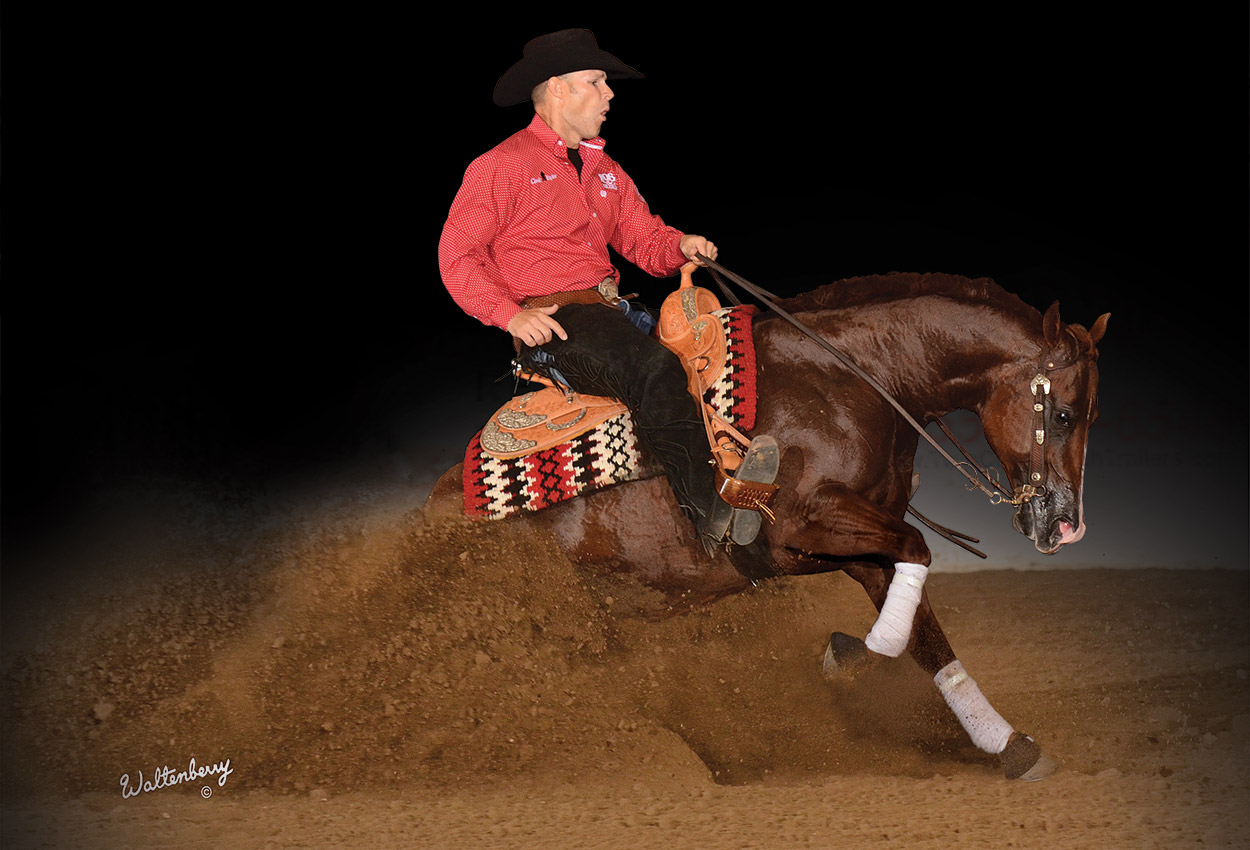 Not Ruf At All achieved reining’s Triple Crown when
he and Jason Vanlandingham won the Level 4 Open at the NRBC.

The National Reining Breeders Classic (NRBC), held April 17-24 in Katy, Texas, was full of excitement this year from beginning to end. The night before the Non-Pro preliminaries, the Houston area received so much rain that roads, rivers and pastures flooded, shutting down the nation’s fourth-largest city. Although the horses stalled in the Great Southwest Equestrian Center stayed dry, many exhibitors found themselves stranded with no way to enter the grounds.

But reiners are adaptable and willing to help each other out, so the show persevered with only a two-hour delay on the first day and ran like clockwork through the rest of the week. It was a sign that even bigger things were to come on Saturday evening.

After winning the National Reining Horse Association (NRHA) Futurity in 2013 and the NRHA Derby in 2014, Not Ruf At All didn’t have much to prove in his final year of limited-age competition. He still brought everything he had and secured the third leg of reining’s Triple Crown when he marked a 231 for the Level 4 Open Championship.

In a finals where the top 12 horses marked a 225 or higher, every rider was feeling the pressure. Each time a high score would appear, it seemed like only a matter of minutes before an even higher score would bump it out of place.

“The higher the scores got, Jordan [Larson] and Casey [Deary] and I were out there kind of laughing. It was getting crazy,” Vanlandingham said. “We knew that we were just going to have to go in there and just lay everything down. And every- body was, and it was working for everybody, that was the crazy thing. A lot of times when people start going that hard, wheels start to fall off, and it actually happened to me on my yellow horse [Smokinghot Hollywood] earlier. I had him slip out of lead on me.”

By the time Not Ruf At All and Vanlandingham entered the arena as the second-to-last draw, the leading score was a 230. Topping that score by 1 point, they finally walked away as NRBC Champions. Including preliminary money, Not Ruf At All has lifetime earnings of $413,038, according to Equi-Stat. His winning performances in the Triple Crown shows accounted for $302,080 of that total.

“Obviously it’s been a lot of fun!” Vanlandingham, of Whitesboro, Texas, said of his journey with the stallion. “The horse is extremely talented and extremely good-minded. He’s one of those horses that just gives you a ton of confidence because he does his job every time you ask him. It’s been awesome.

“You’re always looking for the next one that’s like him and so far, we haven’t had any luck trying to find the next Not Ruf At All. He’s definitely upped our expectations of what we want our horses to do.”

“Vinny” belongs to Vaughn Zimmerman, of Springfield, Missouri, someone Vanlandingham has enjoyed working with throughout the years.

“Vaughn’s great,” Vanlandingham said. “He and Justin [Zimmerman] both are guys that just have a lot of integrity. They’re guys that want you to have every opportunity to do the best that you can.”

But overall, Vanlandingham was grateful to everyone who helped him achieve his latest success.

“First of all, God gets all the glory,” he mentioned. “My wife, Adrienne, has been here since before we had great horses, and this business is a very tough business. She’s been right there by my side the whole way. Our four kids – Alexis, Dalton, Courtney and Emma – they’re just as big a part of this as anybody else. They’re out there cleaning stalls and working hard brushing horses and doing stuff. This is a family deal, and I’m just truly thankful to have my family.”